People on Grand Canyon river tours are often stunned by the bright blue waters of Havasu Canyon, especially when compared with the muddy waters of the Colorado. Walking up this canyon and seeing the water is like entering a whole new world. Nearly everyone finds himself asking: Why is this water SO blue? 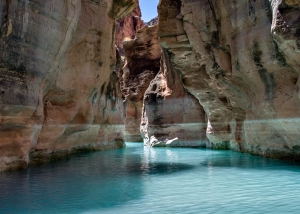 The answer lies in its chemical composition. Havasu Creek is heavy with a mineral called calcium carbonate which gives the water it’s bright, vibrant blue.

Calcium carbonate is also responsible for much of the rock formation you see throughout the canyon—especially near the Little Colorado River and in Havasu Canyon. These crumbly-looking, light-colored deposits (often blackened on top) are formed when the calcium carbonate and carbon dioxide in water combine to form a weak acid. That acid then reacts with limestone and is later left behind when the water evaporates at springs or other sites where it leeches from the rocks. 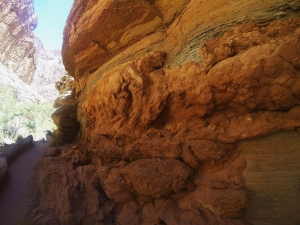 Farther up Havasu Creek, travertine forms so quickly around fallen branches or rocks that it actually changes the flow of the creek itself.

You can find travertine outside of the Grand Canyon as well. Deposits are often formed around hot springs which also tend to have elevated levels of calcium carbonate.

If you haven’t seen this phenomenon, it’s definitely worth a look! Check it out on a Hatch River Expedition in 2016!