November 13th, 2015Invasive Green Sunfish Are Being Removed from the Colorado River in the Grand Canyon

This month, The National Park Service (NPS) and Arizona Game and Fish Department (AGDF) are taking action to eliminate an invasive species of fish from just below the Glen Canyon Dam on the Colorado River. Green sunfish (Lepomis cyanellus) were originally introduced to the Colorado River through stocking. Until this year, the sunfish have not established a consistent population below the dam. However, this July, AGDF found more than 40 of this prolific fish in a slough in Glen Canyon. 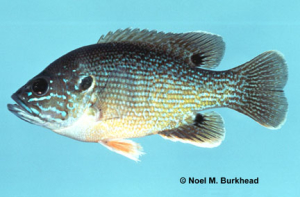 In August, officials tried using electrofishing and seine netting and trapping to remove the fish before they could reproduce and move downstream into parts of the river occupied by the humpback chub (Gila cypha), an endangered species. Although they removed more than 3,000 fish, the population was still large enough to threaten the chub and other native species. NPS and AGFD have now turned to the use of a fish toxin, rotenone, to prevent the fish from moving downstream. According to the National Park Service, "The treatment will be carefully planned and conducted to minimize exposure to rotenone to protect the health and safety of humans, the environment, and livestock."

The green sunfish is not the first nonnative species to threaten native plants and animals in the Grand Canyon. Burros, trout, mudsnails, and tamarisk are all examples of introduced species which have had significant impacts in the ecology of the canyon. Not all species introduced to an environment that they did not develop within necessarily cause a threat to the existing ecosystem. Threats from nonnative plants and animals occur when they crowd out, compete with, or prey on native species. Nonnative species also tend to propagate more widely and readily than native species because their new environments lack the natural controls (predators, competitors, disease) that they would face in their native ecosystems.

NPS and AGFD recognize the need to move quickly to get this population under control. A single green sunfish can produce up to 10,000 eggs, meaning it could quickly establish a large population in the Colorado River within the Grand Canyon. As predators of native fish and their eggs, such a population would have a serious impact on the river’s existing ecosystem. This includes posing a serious threat to a large population of humpback chub living at the confluence of the Little Colorado and Colorado rivers. 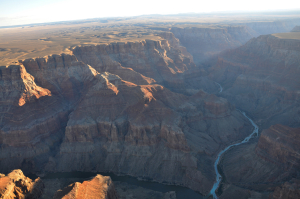 Listed as endangered in 1967, the humpback is the only remaining of three species of chub that used to occupy the Grand Canyon. A combination of the drop in river temperature from the damming of the Colorado and the introduction of other nonnative species like rainbow trout led to the fish’s decline. NPS and AGFD now monitor the species and act to protect it by managing the waters it lives in along with nonnative species that threaten it. Today, the chub has six populations throughout the Colorado River basin. The largest, with a population of between 6,000 and 10,000, is within the Grand Canyon, downstream from where the green sunfish have been found.

Rotenone has been effective at eliminating other green sunfish populations in 22 different waters for similar reasons. The precautions being taken to minimize exchange of water between the treated slough and the river include using an impermeable fabric barrier at the mouth of the slough, adding a chemical rotenone neutralizer outside that barrier, and holding the flow volume of the Colorado River at 9,000 cubic feet during the treatments. In the meantime, the Bureau of Reclamation has put its annual high flow water release—necessary for the maintenance of sandbars and beaches—on hold to keep from pushing the sunfish downriver.

For more information about NPS and AGFD’s efforts to eliminate this population of green sunfish, visit: http://www.nps.gov/glca/learn/news/rapid-response-treatment-to-remove-invasive-green-sunfish-from-a-backwater-slough.htm

Invasive Green Sunfish Are Being Removed from the Colorado River in the Grand Canyon was last modified: November 13th, 2015 by Jessica Clark